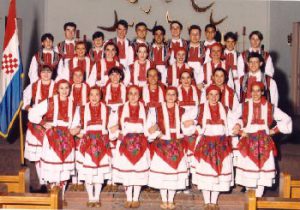 All succeeding pastors and assistants following Fra Marko and Fra Ivan have continued to support the School in all its activities. They continue to support and foster the School with keen interest in its work, students, and teachers.​

At the first meeting, held in New York in 1974, of HIŠAK, the organization covering the work of Croatian Schools outside of Croatia, Fra Ivan Bradvica reported on the work of Chicago’s Croatian School, “Cardinal Stepinac.” Despite problems resulting from a lack of textbooks and other aids, Fra Ivan related that the School has made remarkable progress. He pointed out an interesting statistic, namely, that the school’s tuition in 1974 stood at $35 for one child, $45 for two children, and $50 for three children from the same family.

HIŠAK’s archives speak of the importance of this institution: “The Croatian School “Cardinal Stepinac,” in the parish of St. Jerome, Chicago, which has 114 regular students at present, has been organized as a model HIŠAK school. The students are grouped as follows: Kindergarten, Level One (1st and 2nd grades), Level Two (3rd and 4th grades), Level Three (5th and 6th grades), Level Four (7th and 8th grades), and classes at the high school level. Each instructor teaches a single subject. The Croatian language is studied, as are Croatian literature, history, and geography, along with religion, Croatian music and folk dances. Level Five high school students also serve as assistant teachers. (HIŠAK-CSAC NEWSLETTER, year III, No. 4, 1980, p. 1.) HIŠAK continues: “…at their first meeting, Chicago’s Croatian School “Cardinal Stepinac,” instituted a new program of work wherein each teacher would teach one subject only. Thus, all teachers rotate through each of the grades through the course of a four-hour school day. The teachers are convinced that the students will learn more and that the school day will be more interesting to the students by doing so. In this manner, each teacher will be able to prepare more efficiently.” (Journal of the Croatian Schools of America, Canada, and Australia, year I, No. 1, Sept.-October, 1977, p. 1.)

At the end of 1978, the students took their first exam covering their knowledge of the Croatian language. The results of this exam were accepted as credit toward their high school diploma. The exams were structured according to the “Croatian Proficiency Test,” which was prepared by Fra Slavko Soldo in accordance with the standards set by the Chicago Public Schools. At the time, Fra Slavko was the Executive Director of the Croatian Schools in the USA.(HIŠAK-CSAC NEWSLETTER, year II, No. 3, Winter, 1979, p. 1.)

The Installation of the School Board and Other Committees

The school’s functioning was greatly improved with the creation of a School Board in 1982, by Fra Jozo Čuić. The Board continues to function to this day . The School Board’s first president was Pavo Hrkać. Zdenka Barun assumed the task of creating a wardrobe of Croatian Costumes. She functioned in that capacity over an extended period of time. Nevenka Jurković served as the School’s secretary through many years.

Fra Hrvoslav Ban, of fond memory, left his impressive mark on the School through his noted literary talent. He wrote many original plays, poems, and dramatic readings for various school presentations through the years. His talented efforts served the school through most of the ’80s and well into the ’90’s. His efforts will be remembered lastingly.

The work, sacrifices, and love shown toward our children and toward our Croatian culture binds our teachers, children, parents, School Board, and our Parish into a living whole which serves to give life to our Croatian Community in Chicago as well as a source of cultural connection with our ancestral Croatian homeland.

The primary purpose of our school is to teach its students the Croatian culture, history, and language. Our students also learn a wealth of Croatian songs, and a variety of regional Kolo dances. At various public presentations, our students present dramatic recitations as well as sing a broad repertoire of Croatian songs and dances. Such public presentations are well attended and serve as a platform which demonstrates the accomplishments of our students. These presentations serve to show the fruits of the efforts put forth by our parents and teachers toward preserving our Croatian culture. The Christmas program and that of Mother’s Day are our school’s major events which serve to showcase our student’s capabilities of speaking and singing in Croatian.​

Besides our school, “Club Stepinac” also exists. It was founded in 1988. Its purpose is to gather together those students who have completed the school’s eight grades. The Club’s aim is to gather together graduates of our Croatian School so as to help foster and preserve their ties to our Croatian Community and so as to have them represent St. Jerome Parish at public presentations. The Club is essentially a Kolo dancing troupe which has appeared in several major Croatian Folklore Festivals, namely, Cleveland, 1988; London, 1989; Detroit, 1990; and, Pittsburgh, 1991. These public appearances were under the sponsorship of The Croatian Catholic Union and other well-known societies.

Throughout these past 35 years, the School has appeared in many public events, festivals, and anniversaries. At this point, we will mention only a few: The Croatian Canadian Festival, Festival “4 Stepinac.” the traditional celebration of “Croatian Day-10th of April” in Daley Plaza, Chicago, The Croatian-American Day at Daley Plaza, the annual “Christmas Around the World” at the Museum of Science and Industry, Chicago, the “Festival of Lights,” Chicago, the “International Folklore Festival,” Zagreb, Croatia, the “Đakovački vezovi,” Đakovo, Croatia, and the “Folklore Festival,” Split, Croatia. This impressive group of talent has shown the quality of its work and its deep pride in its name in many cities throughout Croatia and across all of America and Canada.

Croatian School was a host to many groups from Croatia as well as the USA and Canada, just to mention some of them: “Oštrc”- Samobor, “Vuga”- Karlovac, “Hercegovac”- Ljubuški, “Linđo”-Dubrovnik, groups from the American and Canadian cities of New York, Los Angeles, Oakville, Montreal, Toronto, Mississauga, Windsor as well as the groups from Chicago: “Croatian Vines”, “Sacred Heart”, “Hrvatska baština” and others.

A Tamburica Orchestra has been part of our Croatian School since 1988. These talented musicians have appeared in the above mentioned festivals as well. Through more than 20 years, our Tamburica group has been taught and led by the highly talented instructor, Joseph Cvitković. He not only taught them to play the tamburica at a high professional level, but also gave them a life-long gift of love for this unique instrument.

Our Croatian School was especially active during the 1990’s War for Independence through its efforts to aid Croatia. Three of its former students were moved to join the Croatian struggle for independence, namely, Robert Šego, Jure Rudman, and John Kosic. They were also top students in our School. The Croatian School “Kardinal Stepinac” is proud that it succeeded in its mission of fostering a love for Croatia in these young men.

As of 2004, our School was the first Croatian School in America to organize special workshops for our students. With the aid of Croatian Heritage Foundation in Zagreb, and the General Consulate of Croatia in Chicago, four guest professors from Croatia present a workshop-seminar for our students. This program has met with great acceptance by our students.

For the past five years, selected students from our School serve as lectors at Mass at St. Jerome’s Croatian Mass. Since 1999, the seventh and eight grades of our School take a trip to Notre Dame University so as to see the works of our great Croatian sculptor, Ivan Meštrović. Our students also make appearances on our Croatian radio programs in Chicago. Through the efforts of our worthy and generous member, Smilja Tošić, our Croatian School has enriched its collection of Folk Costumes. At present, our collection holds costumes from 17 regions of Croatia. At the beginning and end of each school year, our school holds a picnic for its students at the Croatian Franciscan Monastery in Chicago. The picnics serve as quality time and for getting to know new students.

An extremely important part of the work of our Croatian School is played by the young parents of our students. They not only faithfully bring their children to school, but, in many instances, were, themselves, once students in our school. Some of them, in fact, have even assumed the role of teachers in our school.

From the time of its founding, up to the present, the Croatian School “Cardinal Stepinac,” fostered and cherished our Croatian language. It sought to ennoble our Croatian youth by teaching them to show love toward our ancestral Croatian homeland, our Croatian People, and our Croatian cultural heritage. The School was founded at a time when Croatia was under communist control and bound by the chains of Serbian domination. Today, those chains have been broken and the light of a new dawn has broken for Croatia and for us as well. This new dawn has made our work easier; however, it has in no manner lessened our task of preserving and sharing our Croatian cultural heritage.

The 35 year history of our Croatian School “Cardinal Stepinac,” serves as a guarantee that we will not relax our continued efforts to serve the generations that are to follow. At present, our School, along with its Tamburica group, numbers 110 students, and along with the loving efforts of 13 outstanding teachers.

When placed in the context of the land in which we live, we see that America is fast becoming a land wherein people seek to know their roots and heritage. Our Croatian School and our Croatian language, in fact, speak to that very search. The Croatian spirit and our long history swell within us a new cause for pride and enthusiasm which will serve to educate new generations of Croatian-Americans with pride and joy. Geographic distances are not always obstacles; often, they serve as new reasons to preserve that which determines a man’s identity.